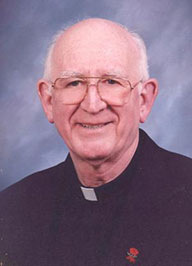 Father Timar was born in Nazareth, Penn., on Dec. 27, 1932 to Frank and Angela (Petrasovits) Timar. He attended Holy Family School, Nazareth, and Sacred Heart Mission Seminary, in Geneva, Ill. He made his first profession of vows as a Missionary of the Sacred Heart (MSC) on Sept. 14, 1952. He continued his studies for the priesthood at Sacred Heart Seminary, Shelby, Ohio and at the Pontifical Gregorian University in Rome, Italy, where he was ordained to the priesthood on July 13, 1958.

Father Timar studied at Loyola University, Chicago, and the University of Chicago specializing in German. He taught at the MSC seminary in Geneva, and served as superior for the MSC community in Youngstown, Ohio. He served as pastor of St. Francis of Assisi Parish, Warwick, RI, and St. Mary’s Parish, Sycamore, IL. Since 2019 he has resided at Sacred Heart Villa, the MSC retirement community in Center Valley.

Father Timar is survived by his brothers William (Ann), Edward (Sue), and John (Emily) and many nieces and nephews. He was predeceased by his parents, sister and brother-in-law Angela and William Sommers, infant brother Paul, and nephew Edward.

In accordance with the corona virus guidelines, a viewing will be held on Tuesday, September 15, beginning at 6 p.m. at Holy Family Church, 410 W. Center St., Nazareth, PA., followed by a Vespers service at 7 p.m. A Mass of Christian Burial will be celebrated on Wednesday, September 16, at 11 a.m. preceded by a viewing beginning at 10 a.m. Burial in the parish cemetery will follow.

In lieu of flowers, contributions in memory of Father Timar may be made to the Missionaries of the Sacred Heart, 3300 Station Avenue, Center Valley, PA 18034 or to Holy Family Church, 23 Forest Drive, Nazareth, PA 18064. Online condolences may be offered at www.jfreichelfuneralhome.com.