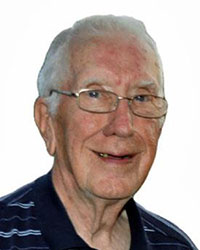 Bob served in the U.S. Navy and spent time in the Philippine Islands as WWII was ending. Returning home to Elgin he joined the ranks of the Elgin Police Dept. for 3 years. Bob then took a job with Bunge's Tire and Service Station and worked there until retiring in 1989. His career as a salesman and passion to serve others, led him deeper into his faith.

He was ordained a Deacon in the Catholic Church in 1982 and assisted the Pastors of St. Laurence Church in Elgin. In 1990, he was hired by St. Joseph Hospital in Elgin as a chaplain, serving others until his retirement, which neared his 90th birthday.

In lieu of flowers, memorial gifts can be made to St. Laurence Catholic Church or Highland Oaks Nursing Home of Elgin (highlandoakselgin.org).

A private Church ceremony will be held on Sat., Nov. 28 for family only. Burial immediately afterwards at Mount Hope Cemetery. More about Bob at robertjosephreal.com. Laird Funeral Home, Elgin is assisting the family, 847-741-8800 or www.lairdfamilyfuneralservices.com.