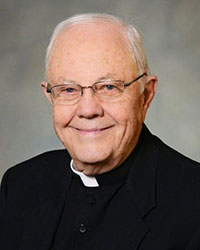 Monsignor Brady was ordained to the priesthood May 27, 1954 by the Most Reverend Raymond P. Hillinger at St. Joseph Church, Harvard, Illinois. Monsignor’s first assignment was as Parochial Vicar at St. James Parish, Rockford (1954-1958). He was then assigned as a faculty member at Marian Central Catholic High School, Woodstock (1959-1961); and was then assigned Administrator at St. Patrick Parish, Hartland (1960-1963). He then served as Superintendent at Marian Central Catholic High School, Woodstock (1961-1963); he later served as Superintendent at Boylan Central Catholic High School, Rockford (1963-1969). He also served as Director of the Catholic Education Office (1968-1977). Monsignor was assigned as Pastor at SS. Peter and Paul Parish, Rockford (1972-1979). He served as Director of Priestly Life and Pastoral Ministry (1977-1980). He was then assigned Rector of the Cathedral of St. Peter, Rockford (1979-1984). In 1982, he was assigned as Vicar for Spiritual Formation and later appointed Director of Bishop Lane Retreat House. In 1987 he was assigned as Spiritual Director for the Permanent Diaconate; that same year Monsignor Brady was assigned Vicar General serving in that position until 2012. In 1994 Monsignor received the Papal Honor of Protonotary Apostolic Supernumerary, the highest level title of Monsignor in the Church. He was then assigned Pastor at St. Peter Parish, South Beloit as well as Church of the Holy Spirit, Roscoe (1989-2004). Monsignor also served as Director of Catholic Cemeteries from 1997-2012.

Monsignor Brady retired from active ministry on July 1, 2004 and continued to assist in various local parishes. He served the U.S. Air Force as Technical Advisor to the Chief of Chaplains and gave ecumenical adult workshops for the Air Force in England, Spain, Germany and Turkey. In 1997 Monsignor Brady published his first book “The Understanding Heart” and later published “The Power of Listening.” Monsignor was also a gifted artist and had a great passion for anything railroad, and his prized alma mater, Notre Dame. Monsignor Brady touched many lives and is remembered fondly by so many.

He is predeceased by his parents, brothers William John, Robert Leo and Richard Paul Brady. He is survived by his sister-in-law Hanna Brady; nieces Deborah (Jack) Venable, Colleen (Dan) Calhoun and Laurie (Dennis) Wilkening. Nephew David (Katherine) Brady and many great-nieces and nephews.

Mass of Christian Burial will be on Wednesday, December 16, 2020 at 11 a.m. at the Cathedral of St. Peter, 1243 N. Church Street, Rockford. Walk through visitation will be from 3 p.m. - 7 p.m., Tuesday, December 15, 2020 at the Cathedral. Interment will be at St. Joseph Catholic Cemetery, Harvard, Illinois. Arrangements are being completed by Fitzgerald Funeral Home, Rockford, Illinois.

Due to Covid-19 restrictions, the Funeral Mass for Monsignor Brady will not be open to the public but will be livestreamed at www.rockforddiocese.org.