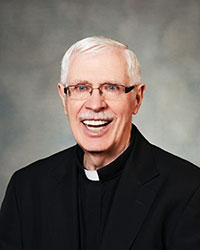 The Chancery received word that Reverend Karl P. Ganss died on Monday, February 1, 2021 at his home in Rockford.

Father Ganss was ordained a priest for the Missionaries of the Sacred Heart by the Most Reverend Joseph McShea in Nazareth, PA., on September 21, 1968. Father served as a Missionary of the Sacred Heart (MSC) in various parishes as weekend help in the Rockford Diocese until he was incardinated into the diocese as a diocesan priest. Father’s first assignment was in 1972 as Religious Education Coordinator for the McHenry Deanery (1972-1977). He then was assigned as Superintendent of Catholic Education for the McHenry Deanery (1977-1982); and was then assigned as Parochial Vicar at Holy Angels Parish, Aurora (1982-1983). He then served as Administrator at St. Patrick Parish, Hartland (1983-1984). Father was assigned as Diocesan Director of Parish Renewal Programs (1983-1986). In 1984 Father was assigned as Pastor at St. Mary Parish, Durand as well as St. Patrick Parish, Irish Grove (1984-1995). He was later appointed as Diocesan Director of Evangelization (1986-1989), an assignment that brought him much pride. He also served as Chaplain for the Knights of Columbus Father Reedy Council #4941. He then served as Vicar for Spiritual Formation (1989-2000); he was later assigned Pastor at St. Mary Parish, DeKalb (1995-2003). Father was then assigned Pastor at St. Gall Parish, Elburn (2003-2012) and retired there from active ministry on June 29, 2012. He later served as Administrator at St. Gall Parish, Elburn (2015-2016). During his retirement Father Ganss assisted in various local parishes and continued his service with the Apostleship of the Sea.

Father is predeceased by his parents Karl and Philomena and his sister Phyllis Van Zyl. Father is survived by his sister Charlotte McClain, his cousin Micheline Morgan and several nieces and nephews.

Mass of Christian burial will be on Wednesday, February 10, 2021 at 11:00 a.m. at St. Gall Church, 43W885 Hughes Road, Elburn. Walkthrough visitation will take place 9:30-10:45 a.m., at the church prior to the Funeral Mass. Burial will take place at St. Gall Cemetery, Elburn. Arrangements are being made by Fitzgerald Funeral Home, Rockford. In lieu of flowers donations can be made to Catholic Charities. All donations will go directly to Father Ganss’ Foundation, The Karl and Philomena Ganss Immigration/Refugee Support Fund.

Due to Covid-19 restrictions, the Funeral Mass for Father Ganss will not be open to the public but will be livestreamed on the St. Gall Catholic Church Facebook page at https://www.facebook.com/stgallelburn.