Bishop David Malloy will join with bishops around the world in opening the preparation process for the Synod of Bishops during the celebration of holy Mass Sunday, October 17 at 7:30 a.m. at the Cathedral of St. Peter, Rockford. The Mass “For a Synodal Church: Communion, Participation, and Mission,” will be livestreamed on the Diocese of Rockford Facebook page.

For more on the Synod https://www.vaticannews.va/en/vatican-city/news/2021-09/text-read-in-english.html

The Chancery received word that Reverend John T. Heraty died on September 24, 2021 at Friendship Village of Schaumburg, where he was a resident.

Father was born on June 23, 1939 in Chicago, IL, to Peter and Catherine Heraty. Father Heraty attended St. Maur Seminary, South Union, KY (1963-1967). He then attended The Catholic University of America, Washington, DC (1969) where he received his Licentiate of Sacred Theology (STL). Father went on to further his studies at Loyola University, Chicago, IL (1973) where he received a Master’s Degree in Guidance & Counseling. He later attended DePaul University, Chicago, IL (1976) and received a Master’s Degree in Sociology.

As required by Illinois Governor J.B. Pritzker’s executive order, masks are now required in all indoor spaces. Bishop David Malloy issues a new instruction to all priests of the diocese outlining the latest protocols in a Aug. 27 letter. 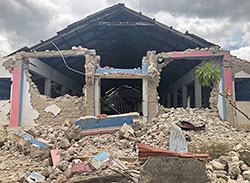 Click to Enlarge
Collection for Earthquake Relief in
Haiti to be taken up Aug. 28-29

A second collection will be held at Masses in parishes across the Diocese of Rockford the weekend of Aug. 28-29 to provide humanitarian relief for Haitians suffering from the recent natural disasters in that country. Funds will assist places like St. Famille du Toirac Church in Toirac, Haiti (right) where 20 people died in the 7.2 magnitude earthquake during a funeral Mass there, Aug. 16.

Checks should be made out to your parish and one check from each parish will be sent for the total collected to the diocesan Finance Office for “Haiti Natural Disaster Collection 2021.”

The total from all the parishes will be sent by the diocese as follows:

The funds collected in this special appeal will become part of the Bishops Emergency Disaster Fund and will be used to support the United States Conference of Catholic Bishops for pastoral and reconstruction needs of the Church as well as the efforts of Catholic Relief Services and/or Catholic Charities USA, the official relief agencies of the U.S. Catholic Church, as they and their local agencies respond to immediate emergency needs and aid in long-term rebuilding and recovery efforts.

Funds will be used in response to the earthquake and Tropical Storm Grace calamities in Haiti and any other disasters that occur and will be distributed where they are most needed.

However, if such purpose(s) become unnecessary, impractical, or impossible to fill, USCCB may use such contributions for other emergency disaster relief where it is most needed as determined by the Committee on National Collections using its emergency response protocol.

Living the Truth of Our Creation

The Diocese of Rockford issued a new document of guiding principles on human sexuality titled “Living the Truth of Our Creation.” This document was released in English and Spanish to all priests and parishes Aug. 6.

On Saturday, June 5, at 11 a.m., Bishop David Malloy will ordain three men to the holy order of priesthood for the Diocese of Rockford.

After his discharge from the U.S. Air Force Veteran, he married his wife, Mary Jane, in 1964. They raised three children.

Deacon Plazewski was a life-long public servant, and retired owner of a delivery service.

Back in His Presence Update

Bishop David Malloy tells priests in a new letter that “Registration is no longer required for Mass attendance."

Read the entire letter in English and Spanish

Diocese Drops Masks at Mass
For the Fully Vaccinated

Bishop David Malloy tells priests in a new letter that “In accordance with the current guidelines of the Centers for Disease Control and Prevention (CDC) and the State of Illinois, fully vaccinated laity and clergy are no longer required to wear masks or social distance. This applies to both sacramental and non-sacramental gatherings. “

Read the entire letter in English and Spanish

State of Illinois Moves to Bridge Phase:
Back in His Presence Guidelines updated

As the State of Illinois moves into the Bridge Phase of its COVID-19 mitigation recommendations, the Diocese of Rockford has updated its guidance for parishes, schools and related activities.
See the new May 13, 2021 updates here.