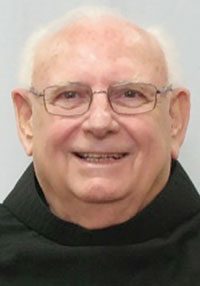 Born in Kewanee on May 29, 1933, he was the eldest of Anthony and Stacy Labedis’ eight children.

He attended the former St. Stanislaus School there and, after his graduation in 1947, he went on to St. Mary’s Minor Seminary in Crystal Lake, under the direction of the Conventual Franciscans.

He studied philosophy and majored in science at Loyola University Chicago before completing his studies for the priesthood at the Province of Our Lady of Consolation in Chaska, Minn. He was ordained on Feb. 21, 1960.

His first assignments were as a high school teacher in California and then at the minor seminary in Crystal Lake. In 1966, Father Tony, as he was known, volunteered to serve as a missionary to Australia, working with miners, sheep herders and immigrants in various parts of the country.

After returning to the United States in 1972, he was involved in parish ministry in Illinois and Iowa, and served his community as vicar provincial, treasurer, and for three
consecutive terms (1994-2005) as provincial minister.

In the Rockford Diocese, he served at St. Anthony of Padua Parish in Rockford as associate pastor and then pastor. He was at St. Anthony from Feb. 3, 2006, until Aug. 1, 2010.

He was in residence at Holy Family Parish in Peoria from 2010 until early 2020, when declining health necessitated his move to St. Joseph Home for the Elderly in Palatine.

Father Tony is survived by his sister, Dolores, and his brother, Joe, as well as many nieces and nephews.

He was preceded in death by his parents; three brothers, Thomas, Bernie, and Andy; and two sisters, Marie and Anita.

A second visitation was in Peoria on Feb. 12 from 4 to 7 p.m. at Holy Family Church, followed by a wake service.
Burial was at Mt. Olivet Cemetery in Kewanee.